Upcoming Events at the Salmon Bothy

A range of music events take place at the Portsay Salmon Bothy venue space, including Open Mic Nights and folk performances from locals and guest visitors in the large upstairs room.

The Salmon Bothy hosts an annual HAAL, a weekend of songs, tunes, poems, dance, stories, workshops, sessions and sing arounds in and around Portsoy. The weekend begins on the Friday with an opening sing-around, where you can bring a song or a tune or just listen and enjoy.

The Festival also includes workshops in the afternoon, many of which are free for those aged under 16 years of age. The workshops take place in the Town Hall, Scout Hall, Station Hotel and the Bothy and see experts pass on their expertise in the fiddle (Duncan Wood), whistle (Kenny Hadden), flute (Cathal McConnell) and piping (Hamish Moore). 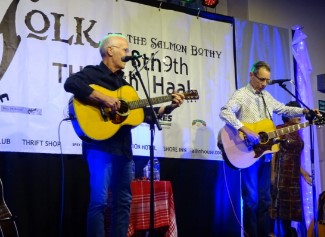 Previous festival highlights include Allan Taylor, considered one of the foremost singer songwriters and guitarists in his genre and has been invited to play around the world for the last 50 years. Taylor’s songs are written with such clarity, you know of what he sings or feel you’re right where the song is.

His partnership with Rab Noake, another outstanding artist with more than 20 recordings and outstanding collaborations with Barbara Dickson and Kathleen McKinness was guaranteed to be a very special night.

Portsoy draws in the crowds for two days on 30 June – 1 July 2018 when it hosts the Scottish Traditional Boat Festival welcoming up to 16,000 people every year from 09:00 to 18:00. The focus of the festival is on boat building, restoration and sailing, but it also hosts a wide range of arts, crafts and music as well as food and beverages. 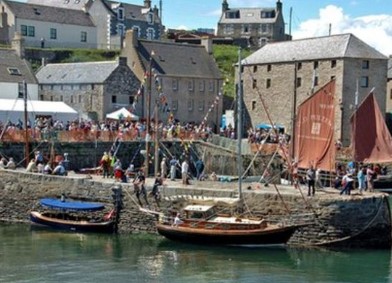 There will be some beautifully crafted sailboats from the charming old harbour to look at with traditional Scottish music playing live and crafters in action. There will always be freshly cooked food and ample beverages.

The Salmon Bothy will host a variety of acclaimed musicians and performers througout the weekend. On the Saturday Dutch band De Kinkels will be playing in the Wally Green Marquee, Portsoy with a licensed bar until late. The Bothy Folk Club Stage will also be showcasing a host of talent over the weekend, with the Youth Stage at Loch Soy hosts local young talent.

Celebrate Hogmanay at the Salmon Bothy on New Years Eve for a night of traditional music to bring in the New Year.

The Salmon Bothy hosts various community exhibitions and events across the year, both in the Museum and Upstairs at the Bothy. Bothy volunteers organise popular exhibitions to showcase local historical photographs and artefacts. 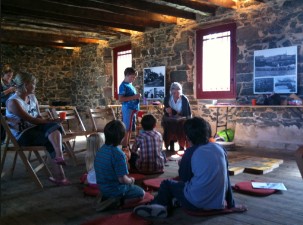 Upstairs at the Bothy is home to Folk at the Salmon Bothy, a group of keen musicians and artists with an interest in traditional folk genres, who love to get together to perform songs, tunes and recite stories.

There are regular open mic nights at the Salmon Bothy, on the 3rd Friday of each month, doors open at 19:00 for a 19:30 start. All are made very welcome to perform songs, poems, tunes and stories – not just folk related, as diversity is encouraged. Those who wish to just listen are also welcome.

The Salmon Bothy has superb acoustics which makes it ideal not just for music nights, but the regular film and theatre events that are open to all. The mobile cinema from North East Arts Touring (NEAT) visit and there is an accompanying supper or film related food, drink and activities on the night.